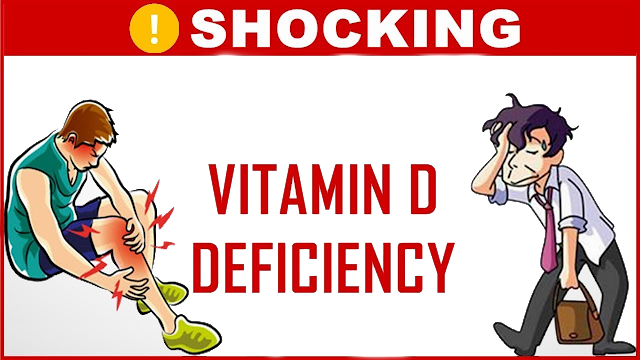 Most of Vitamin D comes from exposure to sunlight. This type of production is endogenous. Another type is on the other hand exogenous, coming from an external source whose food. This vitamin is extremely important for the activity of the muscles and the nervous system because it is the source of the absorption of minerals such as calcium and magnesium. 80% of population has vitamin D deficiencies according to recent surveys.

In fact, vitamins are necessary substances for good mental and physical health. When it comes to vitamin D, a deficiency can have adverse effects on the body whether it is inadequate exposure to the sun, or an unbalanced diet. According to Medical News Today, vitamin D deficiency can have a broad spectrum of specific symptoms.

Being sick frequently:
When your health is vulnerable and is under the influence of climate change and seasons, this is probably due to a deficiency of vitamin D in your body, which weakens your immune system. According to one study, this makes you prone to many chronic diseases.

Fatigue and exhaustion:
People lacking vitamin D often feel tired and exhausted. When this substance is the cause of asthenia, your sleep is not necessarily restorative. Scientists say it is important to correct the body's vitamin dosage to eliminate the feeling of fatigue.

Back and bone pain:
Vitamin D plays a very important role in bone health. If you often have pain, a vitamin D deficiency in your body could be the cause of these pains. Vitamin acts by absorbing the calcium and phosphorus that will be attached to the bones.

Slow cicatrization of wounds:
If your cells take a long time to regenerate after an injury, and your wounds do not heal quickly, make sure your vitamin D levels are balanced. So Proportionate intake can promote healing, according to research.

Sweating
If you sweat a lot, especially at night, it could be a harbinger of vitamin D deficiency because the glands responsible for perspiration are sensitive to vitamin dosing.

Hair loss:
Hair loss may indicate a decrease in vitamin D levels. Alopecia areata is an autoimmune disease characterized by loss of hairiness due to plaque.

Muscular pains:
Many scientific studies have shown that vitamin D deficiency can be a potential cause of muscle pain in children and adults.

By optimizing the levels of vitamin D in your body, you can avoid those pains that can become unbearable.

Autoimmune diseases:
Vitamin D, a very potent immune modulator, can prevent autoimmune diseases such as inflammatory bowel disease and multiple sclerosis. A scientific journal on this subject shows, conversely, that deficiency can be at the origin of these diseases.

Cardiovascular illnesses :
A sufficient amount of vitamin D in your body can protect you from heart attacks, strokes and many other heart diseases. At the same time, a deficit is seen by research as a risk factor.

Infections:
A daily dose of vitamin D can protect your body against infections, including the flu.

As vitamin D strengthens your immunity, it reduces your chances of getting sick.

Tips for Refilling Vitamin D
Although the main vitamin D intake (80%) comes from exposure to the sun, 20% of this vitamin comes from the diet. Also, foods rich in this vitamin should be favored, such as:
Advertisement