Home Tips Here's How To A Can Without a Can Opener

Here's How To A Can Without a Can Opener 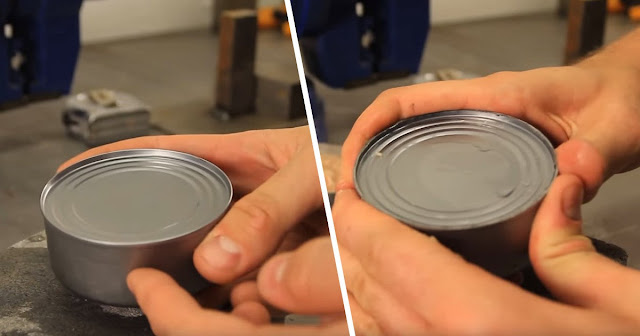 The tin is a metal container used to preserve food. It was invented in the early 19th century, and was first used in the army and navy. It was not until the 20th century before the can was really democratized and used in our homes. The can is now used all over the world by millions of people. To preserve meat, vegetables, fish or dairy products, they can preserve the integrity of food sometimes for years. Traditionally, we open tin cans with a can opener. However, if you do not have one nearby, here is a solution to successfully open them safely.

There are several tips to open a tin can without opener, do not hesitate to choose the one that suits you according to the tools you have.

1st Technique
You will need for this method a Swiss army knife, or any other small and sharp knife. Put the tin on a stable surface, a solid table will do. Stand in front of your can and take your knife, make sure that the knife is perpendicular to the surface of the lid of the can. Hold the knife with one hand while tapping the end of the handle with the other to plant the blade at the edge of the lid. It is important not to hit hard to keep control of the knife. The lid is a thin piece of metal, so you will not have to hit it too hard to pierce it. Repeat this operation all the way along the lid. Once you have gone around, just introduce the knife horizontally into one of the holes you have drilled, then you have to lift the knife like a lever to detach the lid.

2nd Technique
You will need for this method a large kitchen knife or any other knife of similar weight and length. The latter have a pointed end at the handle of the knife, opposite the tip called blade heel. It is still recommended to use a table to stabilize the can. Put yourself in front of it, hold firmly the handle of the knife and come to put the blade heel on the end of the lid of the box. You must then press the knife in order to pierce the lid. Do not hesitate to use your second hand to stabilize the knife and increase the pressure by holding it from above. Do not try to tap the can with the knife, this is to pierce the lid slowly with constant pressure of the knife. When the lid is punctured, put the knife next to the hole you have just formed and repeat the operation by going around the lid. Once again, place the knife horizontally to lift the lid.

3rd Technique
You will need for this method a spoon. Put your box on a stable surface, and take your spoon. Put yourself in front of the box and put your spoon perpendicular to the lid of the box. You must place your spoon on the edge of the box. So you will rub the lid with the spoon with movements from right to left. Slowly but surely you will create a hole thanks to this friction. Repeat the operation along the lid, place the spoon horizontally to lift it.

4th Technique
This method will be useful if you find yourself without utensils. You will need a brick or a piece of flat concrete, or any other object with a flat and sufficiently rough surface. Put the tin on the surface and rub the lid on it. Do not rub too hard or you may spill food. Stop as soon as you see a liquid coming out of the box. This means that the lid is thin enough to be lifted. So return the can, and use any object at your disposal to lift the lid.

Caution :
A knife is a dangerous tool, so do not let children use these methods. Be careful when handling it.